When is the best time to fly to Orlando?

Flying to Orlando in March is usually considered the best time to fly. However, you will find other deals are always available year round. July tends to be the warmest period in Orlando so if you are looking for sun or warmer climates then look to fly around this time. June is the wettest if you need to factor this in to your plans.

Which day is cheapest to fly to Orlando?

Friday is currently, on average, the cheapest day to fly to Orlando. Flying on Saturday will result in higher flight prices.

Flights in the morning are typically the cheapest time of the day to fly to Orlando. Flights in the afternoon are usually the most expensive.

With its main attractions including Disney World, SeaWorld, and Universal Studios, tourists take flights to Orlando more than any other place in Florida.

Walt Disney’s vision turned Orlando, and the adjacent Lake Buena Vista and Kissimee areas, into the world’s busiest, biggest, and best-known theme park, Disney World. The park opened in 1971 and has been making childhood fantasies come true ever since. Today, Disney World includes Epcot, a futuristic showcase of the world’s different cultures; Disney’s Hollywood Studios, a working animation and television studio; and Animal Kingdom, where you see animals in themed habitats. SeaWorld gives visitors an interactive look at the sea and all its facets, featuring themed animal habitats, up-close encounters with animals, and performances by the famous aquatic SeaWorld stars. Universal Studios is a movie-themed park with thrilling rides, production studios and film sets, and onsite luxury hotels.

The mild season is October through April with warm temperatures and low humidity. May to September is a time of high humidity and afternoon storms. The hurricane season is June through November. Late autumn tends to have the best weather.

When is the best time to fly to Orlando?

Orlando’s theme parks are popular year round, regardless of the weather.

The best time to find a cheap flight to Orlando is late May or early June (excluding Memorial Day weekend), as soon as the school year ends; late August, if you must go in summer; or Thanksgiving, which is not as busy as other holidays. There are fewer tourists at the parks from early September until just before Thanksgiving, as well as in early February and early May.

There are plenty of ways to get around Orlando’s tourist scene. Lynx buses and I-ride trolleys travel between the theme parks, but you’ll have to know the schedule ahead of time. Shuttle buses that run by the Mears Transport Group are more expensive, but they run all over the city to hotels, Disney World, Sea World, Universal Studios and the airport. If you’re staying at Disney World, you won’t have to worry about getting around. All the Disney hotels have a free transport system connecting the parks with buses, monorails, ferries and water taxis. 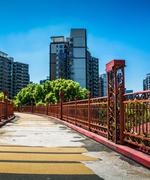